Posted on May 6th, 2016 in Forestry, Forests and Street Trees | No Comments »

When you hear about endangered species, most of us think about the plights of our furry or feathered friends. 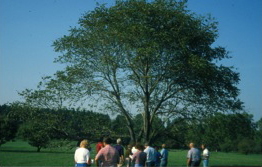 This article describes the plight of some of the less cuddly members of the endangered species list.

Indiana is home to a number of endangered and threatened tree species. In this multi-part series, we will identify some of these tree species and describe some of their unique characteristics.

Our second species is the Butternut (Juglans cinerea), known also by lemon-nut, oilnut, or white walnut. It is a close relative of the more common black walnut. Butternut is a small/medium sized tree that most often reaches a maximum height of 60 to 90 ft., although some trees as tall as 120 ft. have been reported. This short-lived tree often has a forked or crooked trunk and wide-spreading branches, although it can grow straight in forest settings. It rarely reaches 75 years of age or greater than 24 in dbh. Butternut trees are easily grown and have quickly developing fibrous root systems. Butternuts produce both male and female flowers on the same tree and have bright green compound pinnate leaves (alternate) that extend to between 15 and 25 inches. 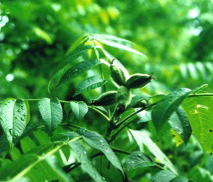 Butternut trees are more valued for their nuts than for lumber as the nuts are sweet and prized as a food source by both humans and wildlife. In fact, these trees served as one of the primary mast species for numerous woodland species prior to its sudden population decline. The average seed-bearing age for butternut is 20 and becomes optimal between 30 and 60 years. Heavy crops occur every 2 to 3 years but nuts are produced each year after seed-bearing age is reached. Butternut is able to naturally hybridize with several other walnut (Juglans) species. The nuts collected from most Juglans spp. including butternut can vary in size and shape however, distinctive differences among species can be noted.

Similar to black walnut, the roots of butternut trees release a chemical known as juglone. Juglone (5 hydroxy-1, 4 napthoquinone) is toxic to a number of plant species. Planting ornamental plants such as azaleas, lilacs, peonies, and rhododendrons, or fruits and vegetables like blueberries, eggplants, peppers, potatoes, and tomatoes near butternut trees is discouraged, as juglone from the butternut roots may kill them or stunt their growth. The toxic zone around walnuts extends 60 to 80 ft. from the base of the trunk, or about twice the size of the crown, and it is likely the same for butternut. Juglone has never been shown to harm humans, but butternut husks exude a strong dye that stains clothing and skin. 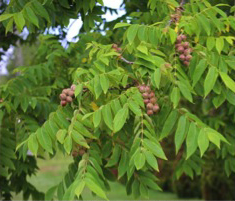 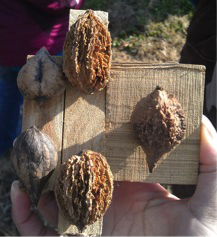 The ranges of butternut and black walnut (Juglans nigra) are similar, however butternut is found farther north and at higher elevations (1500 m) than black walnut. Unfortunately, butternut tree populations have declined significantly throughout the majority of its former range. Conservative estimates have indicated that roughly 13,000 trees remain in Ontario and between 7,000 and 17,000 in New Brunswick. The Forest Service estimated that greater than 77 percent of butternut populations in the southeastern United States had succumbed to the fungus twenty years ago. Today, those estimates approach 90 percent nationwide. A subset of these remaining trees are nearly dead and carrying heavy infection loads, while most of the remaining trees are not reproducing. 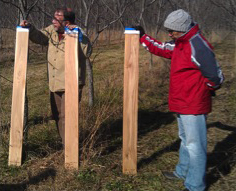 Aside from butternut canker disease, butternuts are also in danger from a host of insect pests such as bark beetles, the butternut curculio, defoliators, husk flies, lacebugs, nut weevils, and wood borers. Unlike the American chestnut (Castanea dentata), the tree described in our first blog entry on trees at risk, the great majority of butternut do not sprout after stem death. Butternut is now rare everywhere, but most of the few populations that still exist are found in riparian areas. At present, insufficient knowledge about management of butternut and how to regenerate butternut seedlings in natural forest stands has hindered strategies for conservation. Some butternut trees have survived; these paltry few trees may show some resistance to butternut canker, but that is still being evaluated. A Japanese Juglans species, Japanese walnut (Juglans ailantifolia), appears more resistant to butternut canker than is butternut, so researchers in Tennessee have begun butternut restoration using hybrids between Japanese walnut and butternut. A breeding strategy using these hybrids, known by the common name buartnut or buarts, may be a promising avenue for the restoration of a butternut-type tree to the eastern forest. Backcrossing buarts to butternuts and development of a disease screening technique could be a step towards restoring this species, however progress towards this goal has been slow.