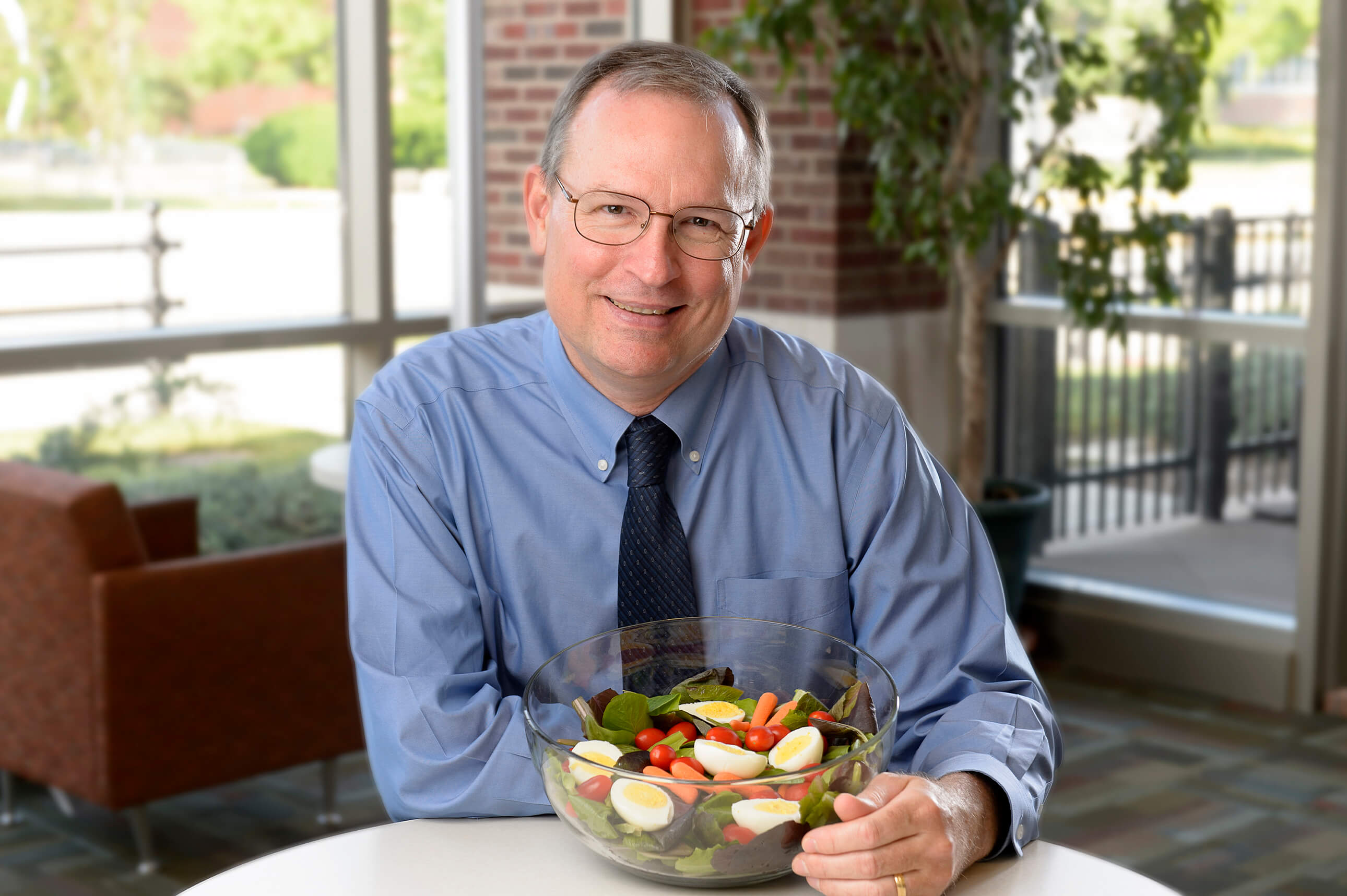 Wayne W. Campbell, professor of nutrition science, and the research team found that adding whole eggs to a colorful salad boosts the amount of Vitamin E the body absorbs from the vegetables. The results are published in The Journal of Nutrition.

WEST LAFAYETTE, Ind. — Adding whole eggs to a colorful salad boosts the amount of Vitamin E the body absorbs from the vegetables, according to research from Purdue University.

"Vitamin E is the second-most under-consumed nutrient in the average American diet, which is problematic because this fat-soluble nutrient has antioxidant and anti-inflammatory properties," said Wayne Campbell, a professor of nutrition science. "Now consumers can easily improve their diets by adding eggs to a salad that boasts a variety of colorful vegetables."

Jung Eun Kim, a postdoctoral researcher in Purdue's Department of Nutrition Science, said, "We found Vitamin E absorption was 4- to 7-fold higher when three whole eggs were added to a salad. This study is novel because we measured the absorption of Vitamin E from real foods, rather than supplements, which contain mega-dose amounts of Vitamin E."

Vitamin E, which is absorbed along with dietary fats, is often found in oils, seeds and nuts. Eggs, a nutrient-rich food containing essential amino acids, unsaturated fatty acids and B vitamins, also contain a small amount of Vitamin E. This study accounted for how much total Vitamin E was absorbed when Vitamin E containing foods were co-consumed with whole eggs. This research supports a way to increase the absorption of Vitamin E found in foods that contain low dietary fat. Also, this research highlights how one food can improve the nutrition value of another food when they are consumed together.

The findings are published in The Journal of Nutrition, and the study was supported by the American Egg Board's Egg Nutrition Center, National Institutes of Health and Purdue Ingestive Behavior Research Center.

This research is an extension of a study that Campbell and Kim, along with Mario Ferruzzi, a professor at North Carolina State University, reported in June 2015 showing that by adding eggs to a salad there was an overall increased absorption of the vegetables' carotenoids. Both studies had 16 participants consume a raw mixed-vegetable salad with no eggs, a salad with one and a half eggs, and a salad with three eggs, 0 grams, 75 grams and 150 grams of eggs, respectively. All salads were served with three grams of canola oil, and the eggs were served scrambled to ensure the whole egg was consumed. In the 2015 study, the absorption of carotenoids – including alpha-carotene, beta-carotene, lutein, zeaxanthin and lycopene – was 3- to 8-fold higher when the salad included three eggs compared to no eggs.

Previous research conducted by Campbell and Ferruzzi also has shown that more carotenoids are absorbed when one larger salad is consumed at a meal, compared to smaller salads consumed at two meals during the day.

Campbell's research also focuses on understanding how dietary protein and exercise influence adult health as people age. He served as a member of the 2015 Dietary Guidelines for Advisory Committee.

Note to Journalists: Journalists interested in a copy of The Journal of Nutrition article can contact Amy Patterson Neubert, Purdue News Service, 765-494-9723, apatterson@purdue.edu

BACKGROUND: Most people living in the United States underconsume vitamin E, and dietary approaches to increase the absorption of vitamin E may help individuals to meet their body's needs.

OBJECTIVE: We assessed the effect of adding cooked whole egg to a raw mixed-vegetable salad on α-tocopherol and γ-tocopherol absorption.

METHODS: With the use of a randomized-crossover design, 16 healthy young men [mean ± SD age: 24 ± 4 y; mean ± SD body mass index (in kg/m2): 24 ± 2] consumed the same salad (all served with 3 g canola oil) with no egg [control (CON)], with 75 g cooked egg [low egg (LE)], or with 150 g cooked egg [high egg (HE)]; a 1-wk dietary washout period was included between trials. For the first 7 d of each trial, participants consumed a low-vitamin E diet to reduce plasma vitamin E concentrations. Blood was collected hourly for 10 h and the triacylglycerol-rich lipoprotein fractions (TRLs) were isolated. α-Tocopherol and γ-tocopherol concentrations in TRLs were analyzed and composite areas under the curve (AUCs) were calculated.

CONCLUSION: The consumption of cooked whole eggs is an effective way to increase the absorption of α-tocopherol and γ-tocopherol from a co-consumed meal that naturally contains vitamin E, such as a raw mixed-vegetable salad, in healthy young men. This trial was registered at clinicaltrials.gov as NCT01951313.

College of Health and Human Sciences