Interest in STEM is contagious among students

WEST LAFAYETTE, Ind. — As the demand for highly skilled workers in STEM increases, educators and employers have been pressured to find ways to increase the size of the applicant pool and make it more diverse.

It’s widely accepted that a student’s interest in pursuing STEM-related careers – science, technology, engineering and mathematics -  is affected by gender, prior academic achievement and family support for science and mathematics. In a study recently published in Science Advances, researchers show that students are heavily influence by their peers’ interest in STEM as well.

“We were surprised by the consistency and magnitude of the results,” said Allison Godwin, an assistant professor of engineering education at Purdue University who worked on the study. “Our findings indicate that experiencing even one science course in which students perceive a quorum of interest among their peers can have a large and significant effect on their career choices.”

Humans have been found to “catch” the emotions of others – a concept known as emotional contagion. Although it’s appeared in psychology, sociology and history, it hasn’t been widely applied to classroom contexts. This could be important because research points to adolescents being more susceptible to peer influence.

The results provide insight into what can be done in high school science classes to promote interest among all students and potentially bring greater numbers of them into STEM careers. They stress the importance of motivation, which is often disregarded in STEM education research in favor of achievement and conceptual outcomes.

“Creating motivating classroom environments has implications for both cognitive and attitudinal outcomes, including how students engage in learning and what they aspire to be in the future,” Godwin said.

Given the national push to attract more individuals to STEM careers, understanding the types of environments that facilitate recruitment and persistence is critical.

“More research on how these environments are created within active learning classrooms is needed,” Godwin said. “The notion of creating interest quorums is a powerful one to further scientific understanding.” 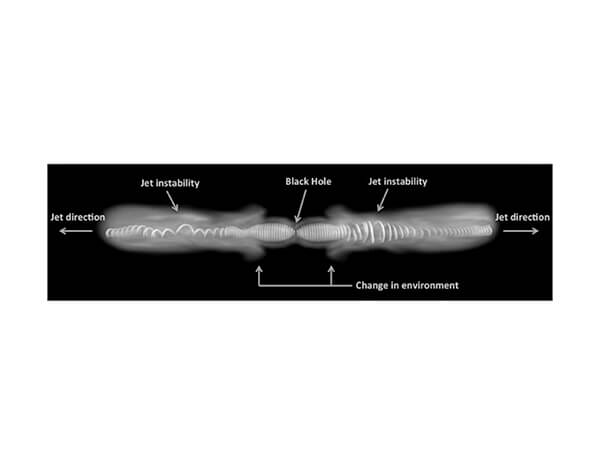 A snapshot is shown from simulations of jets in 3 dimensions following the jet over three orders of magnitude in distance (from Barniol Duran, Tchekhovskoy \& Giannios 2017). The location at which the external medium density changes induces instabilities in the jet and triggers extensive dissipation of magnetic energy. (Image provided) Download image

WEST LAFAYETTE, Ind. — Researchers at Purdue University have successfully simulated powerful flows of plasma leaving a black hole, bringing us one step closer to understanding the complicated relationship between supermassive black holes and their host galaxies.

These outflows of plasma are called jets, and they convert up to half of their energy into radiation. Jets are extremely variable and poorly understood; they flare erratically and their bright glow can last anywhere from hours to months. When they point toward us, they can be observed by any satellite or detector on Earth.

“The reason that jets shine visible electromagnetic radiation remains a mystery,” said Dimitrios Giannios, a professor of physics and astronomy at Purdue. “Scientists have long speculated that processes like shockwaves or instabilities in the magnetic field may cause the observed emission.”

Jets are prone to various instabilities, but the magnetic kink instability is the most likely cause of dissipation. Here, the researchers compared the instabilities experienced by two different kinds of jets: headed and headless.

In a headed jet, the black hole is surrounded by gas everywhere, but in a headless jet, there is little gas along the polar region of the black hole. Headed jets were much more likely to be impacted by the magnetic kink instability because the jet has to drill a hole to make it through the gas, slowing it down and strongly winding up its magnetic field.

“These are prime locations for the jets to shine,” Giannios said.

Black holes eject large amounts of light and gas, which affects how the whole galaxy forms stars. However, a process still seems to regulate how the galaxy and black hole grow together. Understanding how jets shine and interact with the gas in the galaxy is essential to deciphering this relationship, said Giannios.

The study is available here.

The research, which was recently published in Science, shows that information exchange between DNA molecules can be triggered at specific locations and follows pathways controlled by the shape of the cluster or molecular switches. The researchers compare their DNA structure to a “domino array” – one by one, information is passed through the interconnected DNA units via defined pathways.

Dynamic DNA devices that can sense physical and chemical cues have been constructed before, but they’re still relatively simple. Even larger DNA origami structures are usually designed with mostly static segments connected by a few small dynamic regions. These new structures are capable of more complex, dynamic behaviors.

“In some ways, it’s like a computer,” said Chengde Mao, a professor of analytical chemistry at Purdue. “The computer is amazing, but if you boil it down, it works because of how you put all the pieces together. DNA arrays are the same way.”

The researchers believe that someday their findings may be used to create nanotech sensors or amplifiers. Their next steps are to extend the technology to 3-D spaces, larger sizes, more intricate shapes and more complex behaviors.

The study is available here.

Note to Journalists: Any journalists interested in a copy of this journal article should contact Kayla Zacharias, Purdue News Service, kzachar@purdue.edu