But the technology has been extremely slow to improve. While electric cars can more than handle the average American’s daily commute, the average gas-powered car can still go farther on a full tank of gas, charging stations are scarce and it takes significantly longer to charge a battery than to fill a tank.

To improve charging capacity in lithium-ion batteries and increase adoption of electric cars, the industry will have to return to the basic science of how batteries wear out over time.

A multi-institute team of researchers has developed the most comprehensive view yet of lithium-ion battery electrodes, where most damage typically occurs from charging them repeatedly. Manufacturers could use this information to design batteries for your smartphone or car that are both more reliable and longer-lasting, the researchers say. 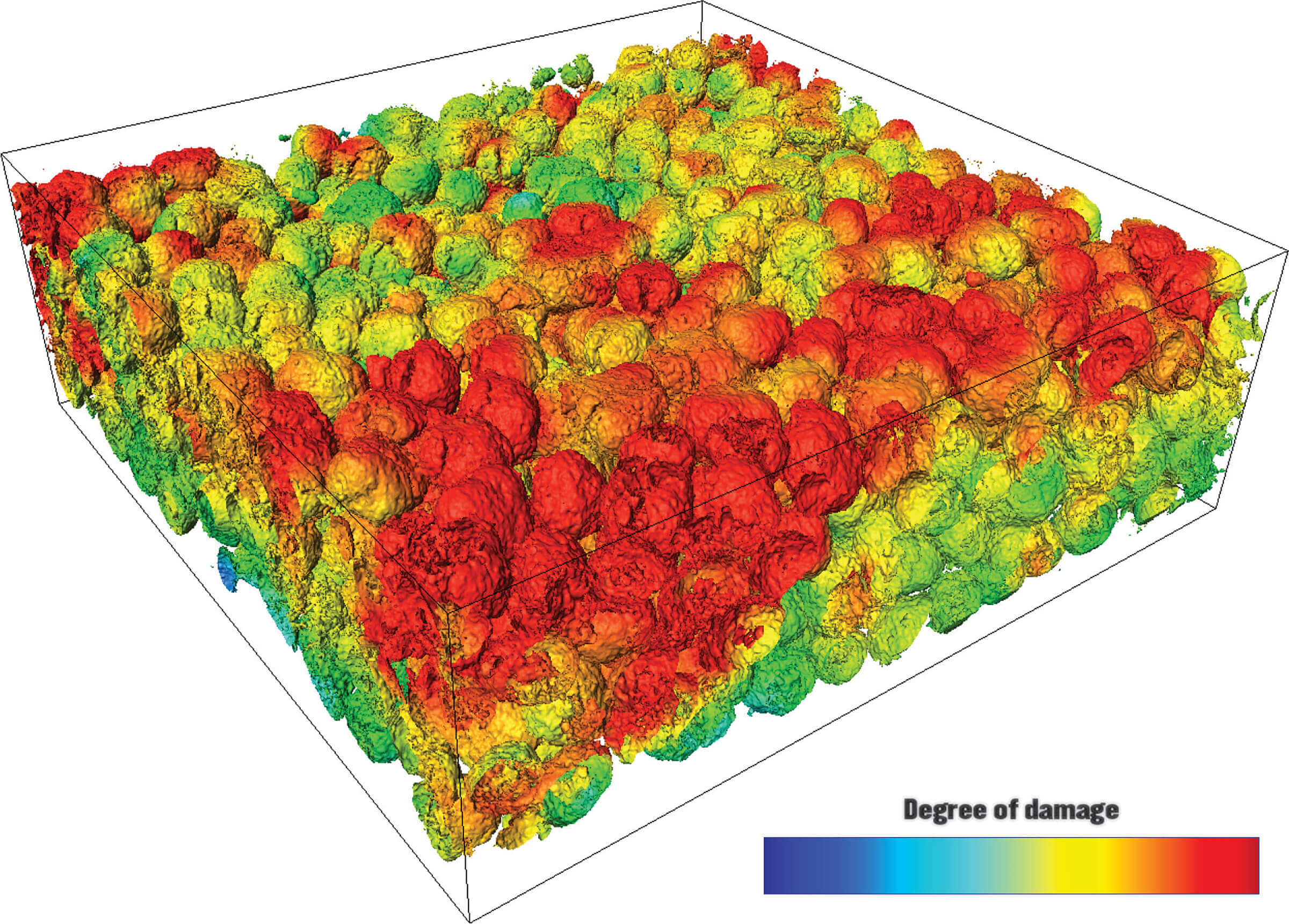 “The creation of knowledge is sometimes more valuable than solving the problem of battery electrode damage,” said Kejie Zhao, an assistant professor of mechanical engineering at Purdue University. “Before, people didn’t have the techniques or theory to understand this problem.”

The technique, explained in the journals Advanced Energy Materials and the Journal of the Mechanics and Physics of Solids, is essentially an X-ray tool driven by artificial intelligence. It can automatically scan thousands of particles in a lithium-ion battery electrode at once – all the way down to the atoms that make up the particles themselves – using machine-learning algorithms.

Granted, there are actually millions of particles in a battery electrode. But researchers can now analyze them more thoroughly than they could before – and at the various operating conditions that we use commercial batteries in the real world, such as their voltage window and how quickly they charge.

“Most work had been focused on the single particle level and using that analysis to understand the whole battery. But there’s obviously a gap there; a lot differs between a single particle at a micron scale and the whole battery at a much larger scale,” said Zhao, whose lab studies the fundamental science of how the mechanical and electrochemical aspects of a battery affect each other.

Every time that a battery charges, lithium ions travel back and forth between a positive electrode and a negative electrode. These ions interact with particles in electrodes, causing them to crack and degrade over time. Electrode damage reduces a battery’s charging capacity.

It’s hard for a battery to have a high capacity and be reliable at the same time, Zhao says. Increasing a battery’s capacity often means sacrificing its reliability.

The researchers’ work to map out damage in lithium-ion batteries started with their finding that degradation in battery particles doesn’t happen at the same time or in the same location; some particles fail more quickly than others.

Researchers have created a new technique that scans thousands of particles in the electrode of a battery at once. The goal is to understand how cracks in these particles impact battery performance, so that the industry can build more reliable batteries with higher charging capacity. (European Synchrotron Radiation Facility image/Yang Yang) Download image

But to truly study this in more detail, the team needed to create a new technique altogether; existing methods wouldn’t entirely capture damage in battery electrodes. A YouTube video is available at https://www.youtube.com/watch?v=cdskb57St8s.

Virginia Tech researchers manufactured the materials and batteries for testing – ranging from the pouch cell batteries in smartphones to the coin cells in watches. Researchers at ESRF and SSRL created the ability to scan as many electrode particles in these batteries as possible in a single go, then produce these X-ray images for analysis. Maps of particle cracking and degradation at the surfaces of particles, called “interfacial debonding,” can now serve as a reference tools for knowing ranging degrees of damage in battery electrodes.

To understand how these cracks impact battery performance, Zhao’s team at Purdue developed theories and computational tools. They found, for example, that because particles near where lithium ions shuttle back and forth, called the “separator,” are more used than particles near the bottom of electrode materials, they fail more quickly.

This variability in electrode particle damage, or “heterogeneous degradation,” is more severe in thicker electrodes and during fast-charging conditions.

“The capacity of batteries doesn’t depend on how many particles are in the battery; what matters is how the lithium ions are used,” Zhao said.

The goal for the project is not for every researcher and industry player to use the technique itself – especially given that there are only a handful of synchrotrons in the U.S. – but for these groups to use the knowledge generated from the technique. The researchers plan to continue using the technique to document how damage happens and affects performance in commercial batteries.

This work is supported by multiple entities, including the U.S. Department of Energy and the National Science Foundation.

Note to Journalists: For copies of the papers, please contact Kayla Wiles, Purdue News Service, at wiles5@purdue.edu. A YouTube video is available at https://www.youtube.com/watch?v=cdskb57St8s. Video was prepared by Jared Pike, communications specialist for Purdue University’s School of Mechanical Engineering.

The multiscale chemomechanical interplay builds up mechanical stress, provokes morphological breakdown, and leads to state of charge heterogeneity in lithium ion batteries. Quantifying the interplay in complex composite electrodes with multiscale resolution constitutes a frontier challenge in precisely diagnosing the fading mechanism of batteries. In this study, hard X-ray phase contrast tomography, capable of nano-probing thousands of active particles at once, enables an unprecedented statistical analysis of the chemomechanical transformation of secondary battery particles under fast charging conditions. The damage heterogeneity has been demonstrated to prevail at all length scales, which causes unbalanced local electrical and ionic conductivity, and collectively leads to the non-uniform utilization of active particles spatially and temporally. This study highlights that the statistical mapping of the chemomechanical transformation offers a diagnosing method for the particles utilization and fading, hence could improve the electrode formulation for fast-charging batteries.

We assess the heterogeneous electrochemistry and mechanics in a composite electrode of commercial batteries using synchrotron X-ray tomography analysis and microstructure-resolved computational modeling. We visualize the morphological defects at multi-scales ranging from the macroscopic composite, particle ensembles, to individual single particles. Particle fracture and interfacial debonding are identified in a large set of tomographic data of active particles. Mechanical failure in the regime near the separator is more severe than toward the current collector. The active particles close to the separator experience deeper charge and discharge over cycles and thus are more mechanically loaded. The difference in the Li activity originates from the polarization of the electrolyte potential and the non-uniform distribution of the activation energy for the charge transfer reaction. We model the kinetics of intergranular fracture and interfacial degradation to confirm that the various Li activities are the major cause of the heterogeneous damage. The interfacial failure may reconstruct the conductive network and redistribute the electrochemical activities that render a dynamic nature of electrochemistry and mechanics evolving over time in the composite electrode. We further quantify the influence of the mechanical damage on the metrics of battery performance. We simulate the electrochemical impedance profile to build a relationship between the interfacial debonding and the impedance of electron transport and surface charge transfer. The mechanical failure disrupts the conduction path of electrons and results in significant polarization and capacity loss in batteries.