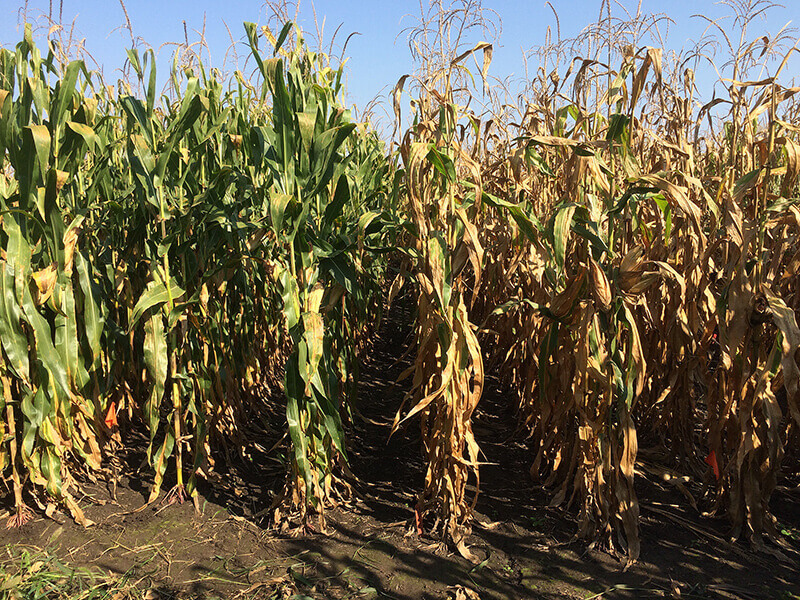 WEST LAFAYETTE, Ind. – During the past 70 years, hybrid corn varieties have increased both yield and nitrogen use efficiency at nearly the same pace, largely by preserving leaf function during grain filling. The Purdue University study’s findings offer strategies for corn breeders who want to continue to improve yields and nutrient efficiencies.

Decades of genetic improvements in corn have led to a fourfold increase in grain yield since the 1930s, before hybrids were widely used. But those yields also required increases in nitrogen application, and loss of excess nitrogen can damage water and air quality as well as wildlife.

Tony Vyn, the Corteva Agriscience Henry A. Wallace Chair in Crop Sciences and a professor in Purdue’s Department of Agronomy​, wanted to know how corn plants have historically utilized nitrogen – especially in reproductive growth – so that breeders can make informed decisions with future hybrids. He and his former doctoral student, Sarah Mueller, obtained seed and grew seven commercially important Pioneer hybrids, approximately one from each decade between 1946 and 2015. They were grown side by side under a range of nitrogen managements and analyzed at several stages of growth through maturity to understand nitrogen uptake and distribution throughout plant tissues.

“There’s been a progressive improvement in nitrogen use efficiency in corn hybrids. That’s coming about as yields have increased while modern hybrids were able to capture more and more of the fertilizer nitrogen applied,” said Vyn, whose findings were published in the journal Scientific Reports.

“There’s been a plateau in nitrogen fertilizer rates applied to corn in the U.S. since the 1980s,” Vyn said. “But we’re capturing more of the fertilizer we apply so that less is lost while more of the nitrogen captured by the plant is creating grain. In our case, we’ve documented progression from creating 42 pounds of grain per pound of nitrogen taken up in the plant to 65 pounds of grain.

“That essentially means that we’ve not necessarily sacrificed the environment in realizing much higher yields now than we did 50 or 70 years ago.”

Vyn’s team found that more modern hybrid corn kernels get much of their nitrogen from corn stems. That’s key, he said, because it’s important to keep as much nitrogen as possible in leaves so that plants can meet the assimilate requirements inherent in the increased corn kernel numbers and kernel size that are foundational in achieving higher grain yields.

“Kernels are going to pull nitrogen from somewhere in the plant. Stems contribute almost nothing to photosynthesis, but keeping nitrogen concentrations in the leaves higher for more of the growing season allows for more photosynthesis and improved yields,” Vyn said.

He added that the findings offer breeders suggestions for how to continue to make improvements in yield and nitrogen use efficiency, focusing on the timing and movement of nitrogen through stems and into kernels.

Corteva Agriscience, of which Pioneer Hybrid International is a part, donated seeds for the research, blindly analyzed tissue samples and provided funding to hire undergraduate student workers and for field and laboratory supply and equipment rental expenses. Sarah Mueller’s doctoral studies at Purdue were supported by a scholarship from the Indiana Corn Marketing Council. Vyn was funded through a U.S. Department of Agriculture Hatch grant.

The competing demands of increasing grain yields to feed a growing population and decreasing nitrogen (N) fertilizer use and loss to the environment poses a grand challenge to farmers and society, and necessitates achieving improved N use efficiency (NUE) in cereal crops. Although selection for increased yield in maize has improved NUE over time, the present understanding of the physiological determinants of NUE and its key components hampers the design of more effective breeding strategies conducive to accelerating genetic gain for this trait. We show that maize NUE gains have been supported by more efficient allocation of N among plant organs during the grain filling period. Comparing seven maize hybrids commercialized between 1946 and 2015 from a single seed company in multiple N fertilizer treatments, we demonstrate that modern hybrids produced more grain per unit of accumulated N by more efficiently remobilizing N stored in stems than in leaves to support kernel growth. Increases in N fertilizer recovery and N harvest index at maturity were mirrored by a steady decrease in stem N allocation in this era study. These insights can inform future breeding strategies for continued NUE gains through improved conversion efficiency of accumulated plant N into grain yield.