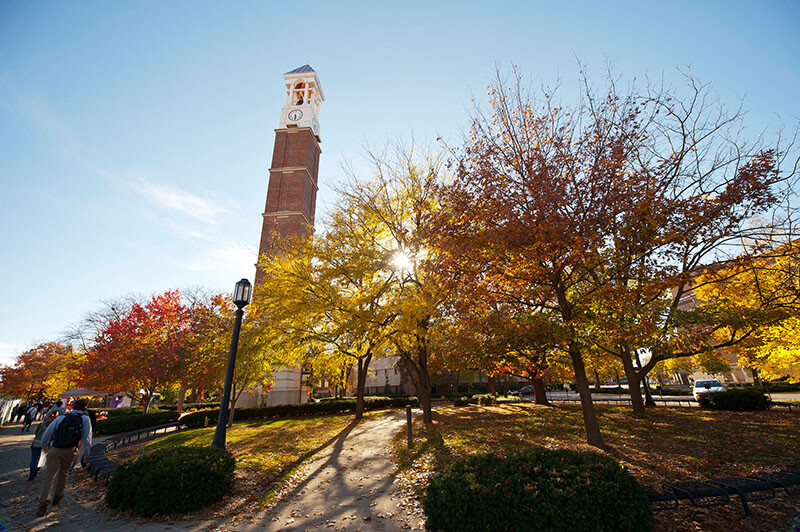 Purdue on Wednesday (Oct. 14) will mark the 25th birthday of the Purdue Bell Tower, the landmark standing tall at the center of campus symbolizing the University's persistent pursuit to reach "one brick higher."

As part of the celebration, Purdue will dedicate a time capsule designed to recognize both the bell tower milestone and this pandemic-marked time in campus and world history. Students were invited to contribute to the capsule by sharing their experiences and submitting a message for future Boilermakers. The time capsule also will include a letter from President Mitch Daniels, a COVID-19 test kit, a Purdue Wellness kit, a copy of the Protect Purdue Plan, a commencement box, a Protect Purdue ambassador uniform, and photos of this fall’s campus opening and of the bell tower in 25th birthday decor.

The 2020 capsule will join a capsule placed during the tower’s original dedication in 1995. Both time capsules are scheduled to be opened at the tower’s centennial celebration in 2095.

The bell tower also will be dressed up for the occasion and will be playing “Happy Birthday” after regularly scheduled chimes. Students are invited to visit the tower for a special photo opportunity, to sing along, and to share their experiences on social media with the hashtag #PurdueBellTower. Student activities including a painting class and taco hour also will be scheduled as part of the celebration.

A gift from the Class of 1948, the Purdue Bell Tower was dedicated at Homecoming on Oct. 14, 1995. The tower, which stands 160 feet tall and is made of red brick trimmed with limestone, is a modern architectural interpretation of the original Heavilon Hall tower built in 1894. When the original bell tower burned down only four days after its completion, President James H. Smart demanded that the structure be rebuilt “one brick higher.” The subsequent tower was actually nine bricks higher, but the statement has inspired generations of Boilermakers to develop strength through hardship.