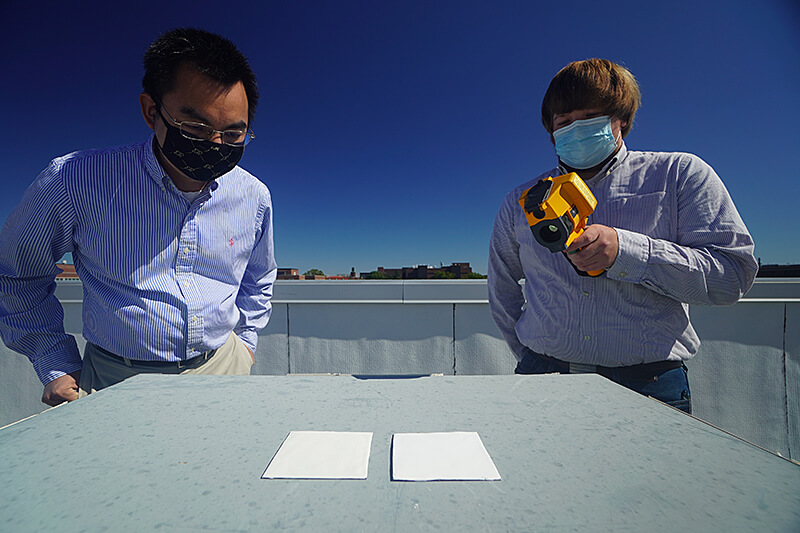 WEST LAFAYETTE, Ind. — What if paint could cool off a building enough to not need air conditioning?

Purdue University engineers have created white paint that can keep surfaces up to 18 degrees Fahrenheit cooler than their ambient surroundings – almost like a refrigerator does, but without consuming energy.

“It’s very counterintuitive for a surface in direct sunlight to be cooler than the temperature your local weather station reports for that area, but we’ve shown this to be possible,” said Xiulin Ruan, a Purdue professor of mechanical engineering.

The paint would not only send heat away from a surface, but also away from Earth into deep space where heat travels indefinitely at the speed of light. This way, heat doesn’t get trapped within the atmosphere and contribute to global warming. A video about this project is available on YouTube.

“We’re not moving heat from the surface to the atmosphere. We’re just dumping it all out into the universe, which is an infinite heat sink,” said Xiangyu Li, a postdoctoral researcher at the Massachusetts Institute of Technology who worked on this project as a Ph.D. student in Ruan’s lab.

Earth’s surface would actually get cooler with this technology if the paint were applied to a variety of surfaces including roads, rooftops and cars all over the world, the researchers said.

In a paper published Wednesday (Oct. 21) in the journal Cell Reports Physical Science, the researchers show that compared with commercial white paint, the paint that they developed can maintain a lower temperature under direct sunlight and reflect more ultraviolet rays.

Their proof is infrared camera images taken of the two paints in rooftop experiments.

“An infrared camera gives you a temperature reading just like a thermometer would to judge if someone has a fever. These readings confirmed that our paint has a lower temperature than both its surroundings and the commercial counterpart,” Ruan said.

Commercial “heat rejecting paints” currently on the market reflect only 80%-90% of sunlight and cannot achieve temperatures below their surroundings. The white paint that Purdue researchers created reflects 95.5% sunlight and efficiently radiates infrared heat.

Developing this paint formulation wasn’t easy. The six-year study builds on attempts going back to the 1970s to develop radiative cooling paint as a feasible alternative to traditional air conditioners.

The researchers considered over 100 different material combinations, narrowed them down to 10 and tested about 50 different formulations for each material. They landed on a formulation made of calcium carbonate, an earth-abundant compound commonly found in rocks and seashells.

This compound, used as the paint’s filler, allowed the formulation to behave essentially the same as commercial white paint but with greatly enhanced cooling properties. These calcium carbonate fillers absorb almost no ultraviolet rays due to a so-called large “band gap,” a result of their atomic structure. They also have a high concentration of particles that are different sizes, allowing the paint to scatter a wider range of wavelengths.

According to the researchers’ cost estimates, this paint would be both cheaper to produce than its commercial alternative and could save about a dollar per day that would have been spent on air conditioning for a one-story house of approximately 1,076 square feet.

“Your air conditioning kicks on mainly due to sunlight heating up the roof and walls and making the inside of your house feel warmer. This paint is basically creating free air conditioning by reflecting that sunlight and offsetting those heat gains from inside your house,” said Joseph Peoples, a Purdue Ph.D. student in mechanical engineering and a co-author of the work.

Cutting down on air conditioning also means using less energy produced by coal, which could lead to reduced carbon dioxide emissions, Peoples said. The researchers have further studies underway to evaluate these benefits.

The researchers are working on developing other paint colors that could have cooling benefits. The team filed an international patent application on this paint formulation through the Purdue Research Foundation Office of Technology Commercialization. For further discussion on this intellectual property, please contact D.H.R. Sarma at dhrsarma@prf.org and reference track code 2018-RUAN-68168-03.

This study was supported by the Cooling Technologies Research Center at Purdue University and the Air Force Office of Scientific Research through the Defense University Research Instrumentation Program (grant no. FA9550-17-1-0368).

Purdue University is a top public research institution developing practical solutions to today’s toughest challenges. Ranked the No. 5 Most Innovative University in the United States by U.S. News & World Report, Purdue delivers world-changing research and out-of-this-world discovery. Committed to hands-on and online, real-world learning, Purdue offers a transformative education to all. Committed to affordability and accessibility, Purdue has frozen tuition and most fees at 2012-13 levels, enabling more students than ever to graduate debt-free. See how Purdue never stops in the persistent pursuit of the next giant leap at https://purdue.edu/.

Radiative cooling is a passive cooling technology that acts by reflecting sunlight and emitting radiation in the sky window. Although highly desirable, full daytime sub-ambient radiative cooling in commercial-like single-layer particle-matrix paints has not been achieved. Here, we demonstrate full daytime sub-ambient radiative cooling in CaCO3-acrylic paint by using large band gap CaCO3 fillers, a high particle concentration of 60%, and a broad size distribution. Our paint shows a high solar reflectance of 95.5% and a high normal emissivity of 0.94 in the sky window. Field tests show cooling power exceeding 37 W/m2 and a surface temperature of >1.7°C below ambient at noon. A figure of merit RC is proposed to compare the cooling performance independent of weather conditions. The standard RC of our paint is 0.49, among the best radiative cooling performances, while offering the benefits of convenient paint form, low cost, and compatibility with commercial paint fabrication processes.


Note to journalists: A video about this research is available on YouTube. The paper is available open-access on the journal’s website. Infrared images of the paint, photos of the researchers measuring the cooling performance of paint samples, b-roll and other multimedia are available via Google Drive. Journalists visiting campus should follow visitor health guidelines.